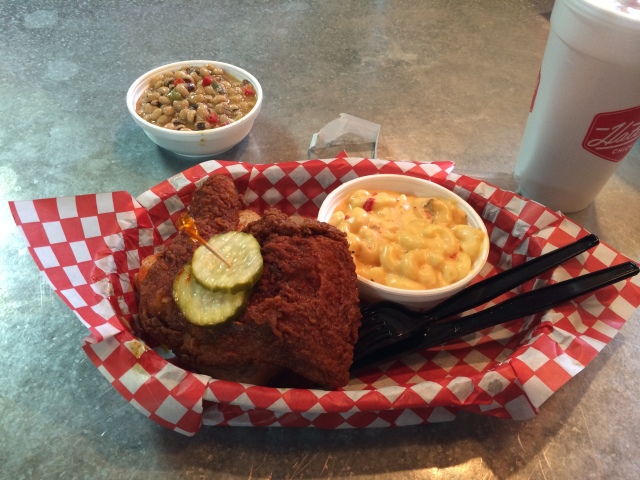 Last week I traveled to Nashville with the cover story of accompanying my  oldest son on a tour of Vanderbilt and to visit my little sister. At the top of my agenda, though, was finally sampling some of the Music City’s hot chicken. That alone was worth the plane fare.

After consulting my sister about our options, it really came down to two choices: old school Prince’s Hot Chicken Shack (no, they don’t have a website – it’s a shack) or relative newcomer Hattie B’s Hot Chicken. We went for the latter because she said it was more consistent and it also was closer to our meeting at Vandy.

Technically this wasn’t my first time having hot chicken, but that other time doesn’t count. You may have seen KFC advertising its “Nashville Hot Chicken.” We treated my son to some after his awesome college test scores several weeks ago and, well, I’ll let David Pemberton of UPROXX tell you:

Okay, so it was a little better, in my opinion, than their usual “11 secret herbs and spices” stuff but fell apart, had no kick, and was generally disappointing. On the other hand, the real deal, as described by Serious Eats, is heavenly:

The magic comes in the mingling of fat and heat. Take fried chicken’s fat-crisped crust and electrify it with a blistering spice blend, then place the meat in a spongy cradle of white bread. The bread soaks up the hot chicken’s juices, becoming just another delivery system for the heat, and the spicy grease lingers on your lips: the afterburn is an initiation to the habit that is hot chicken.

So we went to Hattie B’s and I thought we’d be disappointed. I mean it was something like 11:10 in the morning – a little early for a place for anything with an “afterburn” to even be open, especially in relatively sleepy Nashville. Much to my surprise, though, there already was a line out the door. 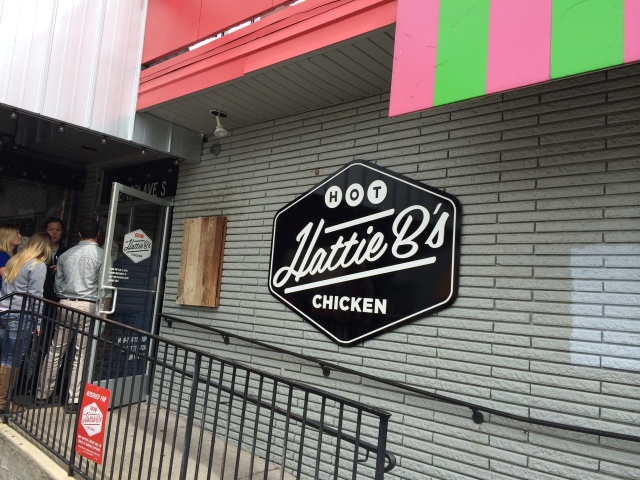 Besides white or dark meat, the choices were Southern (“no heat”), Mild, Hot (“Feel the burn”), Damn Hot and Shut the Cluck Up!!! (“Burn Notice”). I considered going for at least Damn Hot, but a guy in line scared me. He said it would be too much to handle. I don’t know if that’s true, but read Pemberton’s description of the time he ordered the “extra spicy” at Prince’s:

There are no words to describe how hot Hot Chicken really is. It sits on the Scoville scale somewhere between “native Thai” and “molten lava.” I muscled my way through the meal with gritted teeth, spewing sweat and tears and breathless gasps until — finally — it was finished.

So I had the “hot” and it was just right. And by just right, I mean awesomely awesome. I would have had it again for dinner and breakfast the next morning if social and travel plans hadn’t intervened. The photo at the top of this post shows how it looked, along with the sides of pimento mac ‘n cheese and black eye pea salad, in the two nanoseconds before I inhaled it.

I’ll be back soon for more.