My grandmother, like a lot of people’s grandmothers I suppose, didn’t use recipes. But she was a great cook. She lived with us on-and-off when I was a kid and the simple Hungarian meals she made were absolutely the best.

Even after living in Hungary and traveling there for over 40 years now, the way a dish tasted when she made it has been the benchmark against which I’ve measured all other versions of the same thing. Everyone, up to and including trained chefs, fell short. For example, I once had paprikáscsirke (chicken paprikash) at Gundel, the iconic Budapest restaurant then owned by the restaurateur George Láng and the wealthy art collector and cosmetics heir Ronald Lauder. As a nod to traditional peasant food, they had it on the menu. It was good, but it wasn’t Nagymama’s.

When I was in grad school in my early 20’s, I had a sudden inspiration to make  paprikáscsirke with galuska (egg dumplings). I bought what I thought were the ingredients and reached her on a very expensive long distance call. To my growing alarm, she couldn’t really tell me amounts – just approximations like “a pinch” or “not too much” of various ingredients. But whatever she said was good enough to make a passable version. It was good enough that my girlfriend didn’t believe at first that I had made it. She even married me four years later – that’s how good Nagymama’s paprikáscsirke is! (Disclaimer: Matrimonial results may vary).

I’ve refined it over the years and, unfortunately, my grandmother isn’t around to ask for advice any more. Mine still isn’t as good as hers, but I think it’s pretty delicious. So here’s the “recipe”:

Step 2: Skin and remove gristle from a few pounds of dark meat chicken (say five or so legs and same number of thighs).

Step 4: In a deep saucepan, fry the onions in a bit of oil until glassy but not brown. Remove from heat and add about two tablespoons of Hungarian sweet (édesnemes) paprika. Make sure the pan isn’t too hot as paprika will turn bitter if burnt. And don’t use paprika that’s been sitting around for more than six months – it’s useless. Here is what the real stuff looks like being made:

Step 5: Add chicken, pepper, tomatoes, a dash of black pepper, a pinch of caraway seed and a tablespoon of salt. (if you can get it, a squirt of gulyáskrém or, better yet piros arany, works wonders). Cover almost to the top with water and put back on low heat, covered. Leave it that way for an hour-and-a-half to two hours, checking occasionally. Add a little water if too much evaporates. For the last 15 minutes, partially uncover and let the sauce thicken. Chicken should be very moist and falling off the bone. If the sauce is not bright red or orange, add more paprika during cooking, but don’t overdo it! This is what the final product looks like:

Step 6: When chicken starts to cook, peel and cut two cucumbers into extremely thin slices for your uborkasaláta (cucumber salad). Try to remove seeds. Lay out on a plate and sprinkle all over with salt. Then put another plate on top and weigh it down with a bunch of heavy cans or whatever. Press down on it a bit. Leave for an hour and then drain the fluid, rinsing off the salt and patting dry.  Cover in a mix of ¼ cup white vinegar and 1 cup water with a tablespoon of sugar mixed in. Let sit in the fridge. When you’re ready to eat, remove it from the liquid. Put on a side plate and add a small dash of paprika so it looks like this. 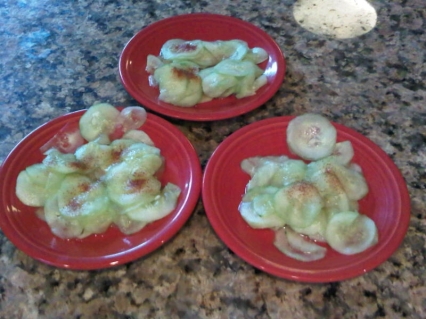 Step 8: Cut into inch-long pieces and drop in boiling water. After two or three minutes or when they rise to the top, remove and boil next batch. A little butter or, if you prefer, olive oil, should be slathered into the finished galuska to keep it from sticking. The final product looks like this: 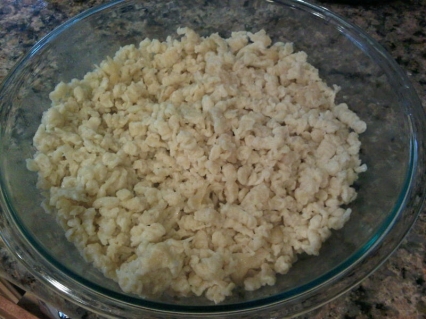 Step 9: Time to eat! Make sure to pour lots of the extra sauce on top of the galuska. For an optional “trefli” way of preparing it and so not the way my grandma did it, but perfectly good and traditional, put sour cream on top. Here’s one happy customer: