Going, going, gone! No, not the book publishing industry – not yet, anyway. I’m referring to the atmosphere yesterday when I visited the big Borders store at Columbus Circle, which is closing its doors in a couple of days. Unlike those perpetually “Going Out of Business” shops that lure in naive tourists around Midtown, this is the real deal as Borders is not just bankrupt but in liquidation and everything really must go. Getting rid of all that everything was a bit harder than planned though and tells you something about the public’s appetite for old-fashioned, printed on paper books.

Even the displays and shelves were for sale. I saw quite a few people carting those off (including the Borders sign for some strange reason), but there was less interest in the remaining books, despite 80 and 90 percent markdowns across the board. Take this slow-moving item by “award-winning journalist” Loren C. Steffy called “Drowning in Oil: BP & the Reckless Pursuit of Profit.” 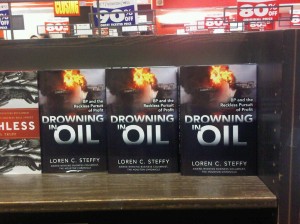 I’m sure it was a fine book (I wasn’t tempted), but maybe it was because at least seven other books with equally clever and dramatic titles (A Hole in the Bottom of the Sea; A Sea in Flames; In Too Deep; Fire on the Horizon; In Deep Water; Blowout in the Gulf; and Black Tide) on the very same subject were all released within a few months of hers. Or maybe it was because publishers of non-fiction, except for shoddy instabooks, are painfully and inexplicably slow in getting them onto the shelves, as if we were still in the 19th century and received the news by sailing ship. Published just six months after the spill and two months after it was plugged, this one was actually pretty quick.

Of course I don’t want to pick on Ms. Steffy. At least she got a publisher to buy her book, received at least a modest advance and now has something on her shelf to show her grandkids. Heck, for the original cover price she can buy five extra copies if she hurries down to Borders. Technically an “award-winning journalist” myself, I had much less luck with the gatekeepers of the printing presses when I made the rounds with my own idea, even though I chose a less crowded topic. A couple of publishers were interested but got cold feet. As one of them explained to me, before wishing me luck, his rejection “was due to the state of the publishing industry right now and the challenges associated with getting new books into the retail stores in sufficient quantities so that people know they are there.” He went on that “it is difficult to know what to publish except for books by people with major media recognition or books that will be ‘bought back’ by a company or interested party.”

In other words, they’re doing so badly that they don’t want to take risks. Call us if you’re already famous or would like to pay for the books yourself in case nobody else wants to. Oh, you could also see Jesus and publish the nation’s top non-fiction bestseller, Heaven is for Real, as told by a four year old who claims to have been there during an emergency appendectomy. Look it up yourself if you don’t believe me.

Another publisher who initially was interested in my proposal explained that if I could change my topic from a skeptical take on alternative energy to one telling people how to make a lot of money off of it then maybe we could talk. The “be on television” or “give us investment advice” meme is displayed by one of the first publisher’s bestselling authors, a TV personality who combines the two and wrote – I kid you not – Psych Yourself Rich. “Psych” is now unofficially a verb. A line from page one:

“Psych Yourself Rich is based on the principal (sic) that our financial lives – much like life in general -are powered and transformed by personal choices and behaviors, both of which are rooted in our values, perspectives, goals, and financial means.”

A writer on financial topics probably should know the difference between principal and principle. I know they both sound the same on TV, and the author is very telegenic, but still. It’s all a bit depressing for an aspiring author. At least I don’t have to suffer the humiliation of having my books collecting dust and heading for the recycling mill even at 90 percent off like this poor bimbo:

I rite good.
View all posts by SJ →
This entry was posted in Finance. Bookmark the permalink.